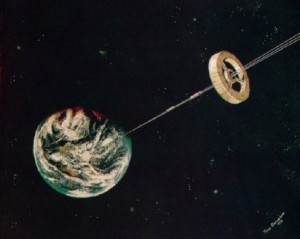 This is the second blog this month on cool new technologies.

Phase Changing Computer Chips. Researchers at the University of Cambridge, the Singapore A*STAR Data-Storage Institute and the Singapore University of Technology and Design have announced a new technology that could increase chip processing speed by as much as 1,000 times. This is possible by replacing silicon with a material that can switch back and forth between electrical states. Such materials are called phase changing materials (PCMs). The researchers have been using a PCM based on a chalcogenide glass, which can be melted and recrystallized in as little as half a nanosecond using appropriate voltage pulses. This process allows each tiny portion of the chip to swap between a crystalline state that is conducting and a glassy state which is insulating, meaning that the chip can be reconfigured on the fly.

In these new chips the logic operations and memory are co-located, rather than separated as they are in silicon-based computers. Currently, the smallest logic and memory devices based on silicon are about 20 nanometres in size. But we’ve reached a limit with silicon chips since electrons leak if the insulating layer is too thin. PCM devices can overcome this size-scaling limit since they have been shown to function down to about two nanometers.

Forever Batteries. Professor Yi Cui and his team of Stanford University have announced a huge breakthrough for batteries. His team has found a way to stabilize lithium, which could result in vastly improved battery performance. This is a big deal because lithium is a highly reactive substance and prone to overheating and catching on fire.

Today’s lithium batteries deal with the instability by using lithium as the cathode and silicon or graphite as the anode. But a battery with lithium for both terminals is far more efficient. Cui and his researchers solved the problem by building ‘nanospheres’, or protective layers of carbon domes on top of the pure lithium anode.

The result of the technology is a staggering improvement in battery life. Current batteries have a coulombic efficiency of about 4%, meaning that they lose 4% of their capacity to be recharged each time and they die after about 25 charges. The new batteries have a coulombic efficiency of nearly 99.99% meaning they can be recharged tens of thousands of times. And the battery is about four times more efficient in terms of the life of a charge. So this means a cellphone charge that will last for several days or an electric car that can be driven nearly 300 miles between charges. And the batteries can be recharged practically forever.

Better Storage Batteries. Imergy Power Systems is making batteries from recycled vanadium. These are large batteries used industrially to store power. The first generation batteries store 200 kilowatt hours of electricity and there are much larger batteries on the way. The big advantage of these batteries is the cost, which is down to $300 per kilowatt hour and dropping.

These are large redox flow batteries that contain a liquid electrolyte. Imergy is claiming that these batteries ought to last ‘forever’ since vanadium can operate in both the negative and positive direction without a chemical reaction.

Nanoparticle Pill. Google is working on a nanoparticle pill that can identify cancer or chemical imbalances in the body. The nanoparticles are really tiny, about 10,000 times thinner than a human hair. In the blood stream they are attracted to and attach to whatever specific chemical or protein they are seeking. By tracking where the nanoparticles congregate, doctors will be able to pinpoint clusters of cancer cells or whatever the markers are looking for.

Space Elevator. Japan’s giant construction company, Obayashi Corporation, has announced plans to build an elevator into space by the year 2050. For those of you who are not science fiction fans, a space elevator is just what it sounds like. It is the construction of a large shaft into space and provides a way to mechanically move materials into and out of space.

Obayashi says that this is going to be possible due to carbon nanotechnology. These new materials are almost a hundred times stronger than steel cables. The plans are to build an elevator that extends almost 60,000 miles into space. Once built, robotic cars could be used to climb and descend on the carbon shaft to ferry people and materials affordably into space. This would provide for an affordable way to let mankind build the huge ships needed to explore other worlds or to bring raw materials from space back to earth.