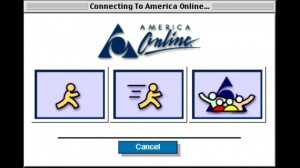 Today I was reading and thinking about all of the different ways that various governments around the world are trying to somehow control and regulate content on the web. And while doing so I saw an article that said that we just passed the 25th anniversary of the first web site. That honor belongs to the CERN research facility in Switzerland. Tim Berners-Lee, a scientist there, posted the first web site on December 20, 1990. This first web page explained how the web worked and provided a few links on how to use the new World Wide Web.

Before web sites there was already a very active online community. These were the days of dial-up ISPs and bulletin boards. It’s easy today to complain about the price of broadband, but most of us have forgotten when you had to pay a monthly fee plus rates of between $1 and $6 per hour to gain access to online dial-up services.

This was all before AOL was large. At the time the predominant web services available were Prodigy and CompuServe. These were the first two services that offered a wide range of different services from email and chatrooms, to gaming and news services.

But the real fun online was to be had using the hundreds of different private servers throughout the country. Guys with a computer and an interest in something would start their own service and their own community. I remember joining an online baseball fantasy league in the early 80s and also playing trivia online at a private server.

What is most amazing is how far we have come in just 25 years. At that time the fastest dial-up modems were at 14.4 kbps. The number of people who were active online was a few million at most. Since then we have already gone through several different major ages of the Internet. First was the AOL age where AOL aggregated so much content that they killed most of their competitors and became the predominant way to get online.

Then came web pages and all of a sudden everybody was adding ‘content’ to the web. We all ‘surfed’ the web looking at the huge variety of pages that people would post. Both businesses and people created their own web pages. I can recall a period where I was amused by using a service that would show random web sites.

Web sites also unleashed e-commerce and all of a sudden shopping became a big thing. eBay was huge for a while until it was eclipsed by Amazon. This was followed by the age of social media and social interactions. Facebook obviously won the social media war but in the early days there were many smaller social media sites that were more specialized and fun. And things like dating online became a big phenomenon.

Today we have entered the age of web video and the hours spent watching video on the web eclipses everything else being done.

It’s easy to think of the web as some sort of fixed thing, but the fact is that there have been major changes every few years since 1990 and there was always something new being done or something new being trendy. Kids today would die if they had to endure the web experience of the mid-90s.

During each of these various phases of the web there have been major issues that everybody was concerned about. For every new innovation that came along something negative was also introduced. We’ve suffered through piracy, spam, hackers, trolls, and viruses at various stages of the web’s development.

This flood of memories brings me back to my original thought about regulators trying to control what happens on the web. Mostly I find the idea amusing, because whatever it is they think they are regulating will change faster than any laws they can formulate – their efforts are always going to be a few years behind web innovation. The Internet genie is out of the bottle and I can’t imagine any way to put it back inside.