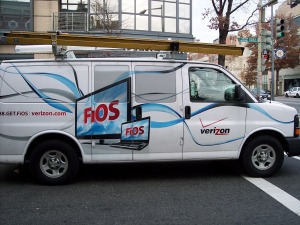 After a two-year pause, Verizon has launched a new version of its fixed wireless access (FWA) broadband, launching the service in Detroit. Two years ago, the company launched a trial version of the product in Sacramento and a few other cities and then went quiet about the product. The company is still touting this as a 5G product, but it’s not and using millimeter wave radios to replace the fiber drop in a fiber network. For some reason, Verizon is not touting this as fiber-to-the-curb, meaning the marketing folks at the company are electing to stress 5G rather than the fiber aspect of the technology.

Verizon has obviously been doing research and development work and the new wireless product looks and works differently than the first-generation product. The first product involved mounting an antenna on the outside of the home and then drilling a hole for fiber to enter the home. The new product has a receiver mounted inside a window that faces the street. This receiver connects wirelessly with a home router that looks a lot like an Amazon Echo which comes enabled with Alexa. Verizon is touting that the new product can be self-installed, as is demonstrated on the Verizon web page for the product.

Verizon says the FWA service delivers speeds up to a gigabit. Unlike with fiber, that speed is not guaranteed and is going to vary by home depending upon issues like distance from the transmitter, foliage, and other local issues. Verizon is still pricing this the same as two years ago – $50 per month for customers who buy Verizon wireless products and $70 per month for those who don’t. It doesn’t look like there are any additional or hidden fees, which is part of the new billing philosophy that Verizon announced in late 2019.

The new product eliminates one of the controversial aspects of the first-generation product. Verizon was asking customers to sign an agreement that they could not remove the external antenna even if they dropped the Verizon service. The company was using external antennas to bounce signals to reach additional homes that might have been out of sight of the transmitters on poles. With units mounted inside of homes that kind of secondary transmission path is not going to be possible. This should mean that the network won’t reach out to as many homes.

Verizon is using introductory pricing to push the product. Right now, the web is offering three months of free service. This also comes with a year of Disney+ for free, Stream TV for free, and a month of YouTube TV for free.

The router connects to everything in the home wirelessly. The wireless router comes with WiFi 6, which is not much of a selling point yet since there are practically no devices in homes that can yet use the new standard – but over time this will become the standard WiFi deployment. Customers can buy additional WiFi extenders for $200 if needed. It’s hard to tell from the pictures if the router unit has an Ethernet jack.

From a network perspective, this product still requires Verizon to build fiber in neighborhoods and install pole-mounted transmitters to beam the signal into homes. The wireless path to the home is going to require a good line-of-sight, but a customer only needs to find one window where this will work.

From a cost perspective, it’s hard to see how this network will cost less than a standard fiber-to-the-home network. Fiber is required on the street and then a series of transmitters must be installed on poles. For the long run operations of the network, it seems likely that the pole-mounted and home units will have to be periodically replaced, meaning perhaps a higher long-term operational cost than FTTH.

Interestingly, Verizon is not mentioning upload speeds. The pandemic has taught a lot of homes how important upload speeds are, Upload speed is currently one of the biggest vulnerabilities of cable broadband and I’m surprised to not see Verizon capitalize on this advantage for the product – that’s probably coming later.

Verizon says they still intend to use the technology to pass 30 million homes – the same goal they announced two years ago. Assuming they succeed, they will put a lot of pressure on the cable companies – particularly with pricing. The gigabit-range broadband products from Comcast and Charter cost $100 or more while the Verizon FWA product rivals the prices of the basic broadband products from the cable companies.